Animal, Vegetable or Mineral.....The Difficulty of Relationships of the Non Human Variety

Those of you who lead more or less normal lives and have friends, buddies, mates and/ or lovers of the human persuasion will have no idea what the hell I am talking about when I say that there is an entire subculture of folk whose Significant Others (in terms of whom their hearts belong to) may be Pet Rocks, Fiddle Leaf Ficuses or members of the Animal Kingdom.  I am not necessarily proud of the fact, but it happens that I am one of this strange breed and, what is even worse,  it appears that many of the friends who inhabit my world either have long had the same proclivities or have been seduced by me into developing them.  (After all, how long can the average person be bombarded, teased and tempted constantly with my tales of massive Hummingbird Wars outside of my kitchen window or streams of night visitors to the Buffet on the porch in the guise of feral kitties, Possums and entire Raccoon families before they weaken and make a non-human connection, just to see what it might be like?)  (You MUST know that I am NOT referring to any sort of uncouth weaknesses of the flesh here, but of pure, unsullied love for another living creature)

Those who know me well have accepted the fact that I seem to have developed into some kind of a hermit in my old age.  I often refer to my sweet abode as my cave, and it is only the assiduous application of a kind of marvelous battery driven tweezer to the hairs on my chinny-chin-chin that keeps me from sporting a real hermit-like beard and moustache.  Being an only child of an only child prepares one for solitude early on in life and, while I used to be much more of a social being, I notice I have drifted more and more into the solitary life as I have gotten older and,  more pertinently, sicker and tireder of gritting my teeth and suffering so many of the world's fools gladly. However, the need for some kind of companionship does pluck at the hem of one's hermit's robe and, since I have always been a fool for anything 4 legged and furry, I have found myself catering to the needs of my pets in a shamefully indulgent fashion usually reserved, when I was younger, for a Prince Charming or, at the very least, a Sugar Daddy. 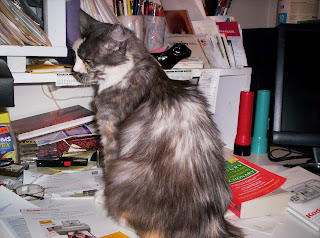 One morning as I was running the blender turning a can of Friskies Salmon into a lump-free silky porridge for Gussie, my Senior Cat, who prefers her breakfast Smoothie style and preferably served as Breakfast in bed......(I carry it on a small tray into the bedroom where she is still sleeping in and gently deposit it near her where she reclines on her fake fur pillow so she can imbibe Roman style without really getting up from the reclining position.).....as I was saying, one morning I actually wondered if I was carying these indulgences too far, but I have decided that any creature who gives me so much pleasure by permitting me to scratch her chin and rub her tummy whenever she feels like letting me do so deserves any pampering I am up to.

And lest you think that my benevolence is only showered on fuzzy creatures, I must confess that I have been known to murmur sweetly to some of my rose bushes and indeed, once caught myself tenderly pinching the leaves of my Fiddle leaf Ficus (yes there really is such a plant and I once had a gorgeous specimen that was about 6 feet tall and very macho, come to think of it).

I could go on for pages revealing idiotic and yea, even embarrassing episodes of demonstrative behavior between me and my non-human buddies, but I will save some of it for future blogs and zero in on the item that inspired this effusion of silliness.  I received an email today from my incomparable
British pal, Anne, whom I have previously mentioned in an earlier blog ( who writes even more magnificently than I do, incidentally) and who shares my insanity for things furry  and feathered.   She has taken up with, of all things, a seagull whom she feeds on her windowsill  with goodies like hand made cheese balls and whom she has christened with the manly name of Spud.....that is before she discovered that Spud might possibly be female because the bird began to bring a clumsy baby seagull along to their social encounters.  However, Spud it has remained, and the bird has become a permanent camper on the windowsill, tapping on the window ungraciously and imperiously if food is not provided in a timely and properly sumptuous fashion.  Anyway, today she confessed to me that she had been into Torquay on the bus and upon returning home found, to her amazement and possibly horror, that Spud was waiting for her at the Bus Stop !!  I told her that I was absolutely outdone by her relationship with Spud....she wins hands down......after all, how many people can claim to be met at the Bus Stop by a devoted if somewhat impatient Seagull ??   I am sure there is not another resident in all of Devon who can make such a claim and I feel  humbled but also extremely proud to know her and possibly to have inspired her to such magnificence.    A true case of the pupil outdoing the teacher......big time!
Posted by Lo at 11:40 PM 2 comments:

How Low can a Blogger Sink....Stick With Me and You May Find Out

Today I received an unexpected glowing comment on my blogs from my dear cousin, Ken, (the husband of Lonni who is the cousin who is responsible for my attempting this blog in the first place)  and I was in the process of writing him an email thanking him for the feedback when I suddenly realized (after I got into the second or 3rd paragraph) that I was wasting decent blog material on a one-on-one letter and I really should plunk my thoughts onto my blog so that anyone who wants to eavesdrop on my exposed, naked  thought processes would be able to get another dose of same.

I have the terrible feeling that this is cheating of the worst kind, but what do I care??????  I never professed to be 100% a paragon of virtue, so here, without further ado, are  the words I was going to send to Ken for anyone who cares to read it.   I really have concocted a good excuse for this loathesome behavior.....  The thoughts expressed therein are valid for anyone who has been enjoying reading my mind so I don't feel totally rotten about doing this.  And if I get a lot of complaints about this that will be fine with me......I will rub my hands in glee.....oh, boy.....some comments....!!!

Oh, thank you for leaving a comment, and such a glowing one. I am blown away by your confession that you check my blog several times a day to see if there are any new entries. That is just the sort of encouragement I need.....(sometime I check my blog several times a day too......first to see if I have made any new entries ( well, I could have performed some magic while my back was turned.....after all I am an ancient person and also a Gemini which means I have an evil twin ) and secondly to see if any of my vast fan base has left any comments.....it seems that feedback is more important to me than it should be.......I guess I am more needy and more susceptible to sweet talk than I ought to be......sob.....sorry about that.......another vile character flaw exposed)

I am sorry too that I have slowed down a bit in writing, but some days it just ain't there..........this bloggin has ramifications that I did not think about when I first plunged in so blithely........there are hidden responsibilities it seems.  I guess what I will have to do is what newspaper columnists or cartoon strip artists do......get a few dozen items ahead so as not to disappoint my panting public....yes, all 5 of you.    I promise that I will continue to leave deposits of my random thoughts as often as possible. I really do enjoy it and now that I have started incorporating pictures once in a while I find it even more interesting (though I am having a very devil of a time getting them placed where I want them and making the page agreeable. Dunno why I am finding the tools for this process to be cumbersome or entirely lacking.  However, I will keep struggling till I get it more or less right.)

Thanks again for your encouragement and give my love to Noa and Lonni.