I just realized that I have been overlooking a fantastic blogging tool......that of re-publishing old blogs when one is unable to put one word after another in any intelligible fashion.  Lately I have  been preoccupied with some urgent matters and each time I have peered into my blogging brain I have seen nothing but a vast expanse of nutthin'.......except for a few wispy bits of ash from frazzled brain cells sacrificed to my efforts to gather up some info for the dreaded IRS.

So, what I have done is go back to the very beginning  of my blogging life when I did not have a clue about blogging (not terribly different from my current clueless condition actually.)   At that time I had only a handful of followers....mostly loyal members of my family, and if I got a single comment I was euphoric.   And, not unlike today, when I got no comments I was grumpy, whiny and generally pissed off.  Some things change and some things remain the same.

Hold onto your hats....here we go.

Hold onto your hats....here we go.


Guess Who Is #1 in Guinness Book of Klutzes

It's no contest, really.  (You may THINK you are a bigger klutz than I am, but I don't really want to fight about it so please, just acknowledge my greatness in the klutz department and let's move on).

I started honing my klutzy skills as a child, dropped out of the race for a number of middle years and now seem to be perfecting my technique in my decrepitude.  I am not bragging about this, you understand, just recognizing and accepting it.

As a child my claim to the title rested on simply falling down a lot,  often from standing on my own foot and then trying to pick up the bottom foot to walk, but also tripping over twigs, pebbles or cracks in the pavement.  When I grew  my great boobs my talents expanded to feats like catching my dress or shirt on the  protruding bolts  holding the ping pong table net in place, thereby rending asunder my garments with great regularity.    Until I learned to allow for the protrusions I hardly owned any clothing which had not been darned or otherwise mended from such encounters, much to my poor Mamma's grief and horror.

Then when I lost 50 lbs. and stopped bumping into so many things the plague went into a state of remission, I guess.   I remained somewhat accident prone but things took on a much more sophisticated quality as I learned to use tools .......I think the epitome was reached when I managed to nail my finger to the picture frame I was building........lesson: never hold the piece of wood with your fingers behind the place where you are hitting the nail with the hammer.

It is a small miracle that I survived all those years of using power tools and building stuff while still keeping all fingers and toes and minor limbs attached to my body.  God was good to me and my Guardian Angels must have worked overtime.  . However, after the past few days I think the plague is returning.  I have been behaving like my left foot is attached to my right leg and vice versa.  This is beyond klutzy.  A few days ago I was trying to put on a stretchy velcro knee brace and pulled so hard to stretch the flap that I pulled my foot off the chair it was resting on thereby knocking over the chair and myself in the process.  Only bruises, tenks gott, but very unsettling (no pun intended).

Before continuing I must explain that one of my many weird habits is to keep my purse (very large with 2 carrying straps) on the floor under the dining table where I live for a good part of the day since that is where the laptop resides.)  Consequently, I should at all times be very careful to ensure that it is tucked safely under the table without protruding enticingly to tempt disaster.  Well, of course, I don't, so there have been many awkward encounters, but none as great as last nite when I rose from my chair to let a cat in or out or fetch some delicacy from the kitchen or something and somehow managed to step into the jaws of the purse which then wrapped it's straps around my leg and anchored me to the floor on the left side.  Meanwhile, my right leg was still merrily making it's way to the other room.  Both dining chairs went over in this one and I found myself in my old familiar position of shame.....in a shambles and general state of disarray on the floor with several cats peering down at me with puzzled expressions.  Careful counting elicited the info that I still had all my body parts attached, no one was bleeding and nothing seemed to be broken, sprained or otherwise mangled.  Sigh.


P.S. On another subject entirely:

To my new follower, Shirley, who made me faint with joy when she said she went back and read every one of my blogs (wow) your comment yesterday has no ID so I do not know how to thank you privately......therefore you must endure this public gratitude and/or embarrassment and humiliation......Thank you!


And, while I am on the subject......., to all my dear followers whose affection and loyalty I appreciate and treasure.........thank you , dear ones from the bottom of my heart....you light up my life!

12/4/09 Less than a week at blogging and already I have a complaint. Hell, when I write an email I often get an email in return. When a writer's book sells the writer gets a royalty. What does an earnest blogger get ??.....bupkas. Only one brief comment so far ( though I must confess I have had several encouraging emails......)Oh, well, old blabby here doesn't really need a dialogue I guess. Sigh. I wonder how long it takes before one gets used to being naked in public.......it IS a very strange feeling. Oh, well......As I often say to my email correspondents....."more later".

Horrors !! In a desperate effort to learn how to upload an image from my pix files onto my blog I have committed an unpardonable sin at worst and an egregious error at best......I intended to try to post one of my cartoons as an experiment and after four or five failed attempts..( three of the drawings needed to be rotated 90 degrees, one somehow got enlarged beyond fitting the page and another one just disappeared amid my wild flailing around) I chose one set of pohotos I knew was right side up and, intending to only create a draft and delete, old fumble-fingers accidentally hit "publish". Since I do not know how to delete an item once it has been published I fear I will have to live with those images of someone who looks vaguely familiar but whom I have not seen in some time. The only saving grace I can think of is the fact that whenever any of you find yourself complacently and patronizingly thinking of me as a harmless old lady, just remember that I wasn't always so harmless........ Please forgive this transgression......I swear it wasn't intentional. Those of you who have seen me in my current decrepitude should take warning, however, that this sort of thing could happen to anyone after 80 odd years of wear and tear........

who is this Hottie 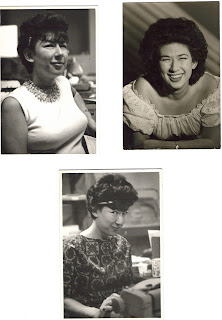 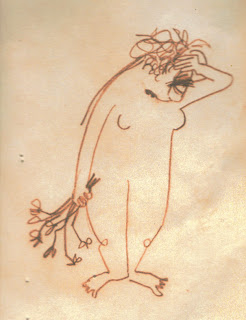