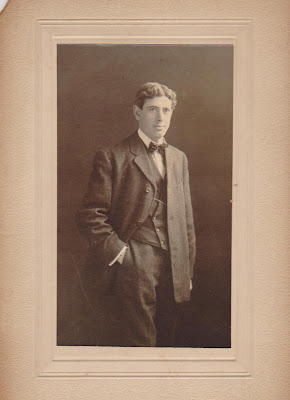 These photos are of Uncle Harry Bloomingdale (Blumenthal) the second oldest son of the family.  One shows him with the patriarch, Louis, his father. (at least I think that is Harry...hope I am right cause there is no one to correct me if I am wrong.) (If I am wrong, it might be Uncle Barney.....I don't think it looks like Uncle William who was not as handsome and whose facial bone structure was quite different. )
I don't know if you can tell that I am going crazy trying to fit this text properly around the photos......I  have never yet gotten the hang of doing this right, dammit, so please forgive these weird page arrangements. 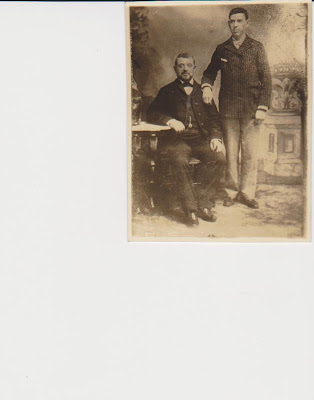 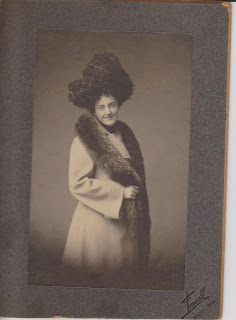 The lovely lady is his wife, Essie.   As I have mentioned before, in an earlier blog, when Uncle Harry went north to New Bedford, Mass. he changed his name from Blumenthal to Bloomingdale.  I must assume that it wasn't anti-semitism on his part as much as a fear of possible negative sentiment up in New England, and in order to make his way more comfortably in the commercial world he made the switch. In the same vein he also married
Essie, a Gentile, (yes, a Goy) but no shame to him......she was a wonderful woman and a fine addition to the family.

They never had children, but their household was enhanced by a niece of Essie's named Flora Pearce who lived with them to the end of their long lives.  Flora was a gentle soul who loved birds and nature and, late in life was active in the New Bedford Community in those areas,  I corresponded with Flora for years after Harry and Esie were gone and I seem to recall that she told me that a Nature Walk in the area had been named after her.  When they came to visit she was always with them....they treated her like their daughter and so did we.

Uncle Harry opened a very successful Department Store in New Bedford called Bloomingdales.  I do not think that the current "Bloomie's" came from that store, but who knows.  He may have been the most successful of the brothers and was quite wealthy, enough so that he was able to buy or build a vacation home on Horseneck Bay which was his pride and joy.  Sadly, an enormous hurricane in the 30's or 40's totally destroyed the house and nearly did Uncle Harry in too.  No, he wasn't there when it happened, but the loss of Horseneck broke his heart and he was never quite the same afterward.  I have many photos of Aunt Jen, Mamie and my Mother which were shot, I believe,when they visited him and were taken to Horseneck.  I will try to locate them and publish a few because they were so evocative of the romantic style of the period.  Uncle Harry was also quite a photographer and had a darkroom and did all kinds of inventive things with his photos.

However, the most awesome story involving Uncle Harry, Essie and Flora came from much later when Harry was in his 80's and very ill and infirm and his wonderful women not only rose to the occasion, but almost surpassed the Blumenthal quality of sacrificing for Love.  At this point in time all of Harry's wealth was gone.  The three of them lived in the same house/mansion in New Bedford that they had occupied for most of their lives, but it was a very meager existence.  Harry, at this point, was quite portly, but could not walk. The only bathroom in the large house was up a long flight of stairs on the 2nd floor where the bedrooms were so there was little use in relocating him to a bed or couch on the first floor.  Consequently, each day the two women would somehow carry him on their backs, up the stairs to the bedroom and back down next morning so he could spend the day with them.  I  have no idea how they managed this incredible feat since both of them were very spare and had never done manual labor, but manage they did for I don't know how many years till Harry died.  Wow.

After that they kept each other company, both incredibly hunched over from their labors, till Essie was well into her 90's I believe.  And remained remarkable, resourceful and awe-inspiring.  I remember calling one winter and talking to Flora who told me that Aunt Essie couldn't come to the phone right now as she was up on the ladder hanging the winter drapes to keep the house warmer, or outside shovelling the snow off the walkway or something extreme.

I visited them once in the 60's when I was sent to a seminar  in Boston from one of my Computer jobs, and I had the time on the weekend to catch a bus to New Bedford.  For years I had heard about the grand old house from my Mother and knew some of it from old photographs and I was thrilled to have the chance to see it.  It did not disappoint except to break my heart at the signs of poverty where there had once been opulence.  I took them a new little table radio because I had heaard that their had recently died and that they missed it.  They, in turn, treated me to a wonderful lunch from Kentucky Fried Chicken and we had the most wonderful visit.  I still tear up and get a lump when I remember Aunt Essie saying wistfully, " Oh, Edna." and when I gently said, "No, I am Lois." she was miffed and said, "Oh, I know that, I was just remembering your wonderful Mother."   Sob, sniffle.