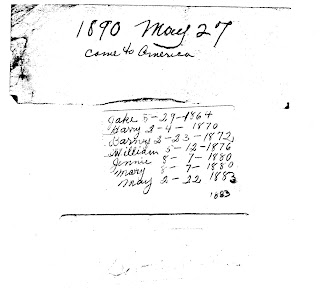 I am going to try to bring forth from my files a newly scanned document using my new Canon Printer (which seems to have been a lucky find, so far at least).  (see previous blog for my rant about printer malfunctions.)

This is a handwritten record of Sarah and Louis  Blumenthal's childrens' birthdays plus the awesome statement: "1890 May 27 - Came to America".  My Grandma Mamie wrote it and I found it in an old purse of hers when I was tidying things up after she left us at the ripe age of 95.  In examining the birthdays I came to the conclusion that my great grandparents must have only had sex in either May or August of any given year since all their children seem to have been born either in May or in February.  Of course, that is purely idle speculation.

If they all came here together, then the boys were grown men or teen-agers and the girls were still tender sprouts of 10 and 7. 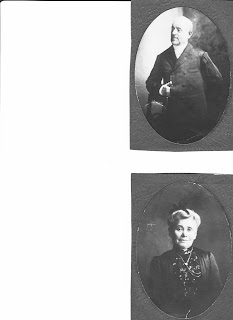 On the right are the Matriarch and Patriarch, Sarah and Louis Blumenthal.  I think these must have been taken in Philadelphia after the family came to America from somewhere in Russia.  I am just guessing but I would think they are probably in their 50's or 60's here.  I love these photos.

The photo below appears to have been taken in the kitchen, probably in a house in the neighborhood called Strawberry Mansion......I think it was near the Art Museum and the River Drive..........Great Grandpa has hand resting on what looks to me like a pillow...I suspect he may have had a stroke........of course it could also be a small table top....I can't really tell for sure.  (my Mamma always talked about living on Euclid Avenue in Strawberry Mansion and I would guess that most of the family members had houses in the same neighborhood.  I think they probably all moved to West Philadelphia around the same time too..... My Mamma and Grandparents to 6106 Christian Street and Aunt Jenny and family including Sarah and Louis to 62nd and Christian Street.  At this point I think my Mom was in High School (Girls High) and I suspect that Sarah and Louis needed to be taken care of so Aunt Jenny volunteered to have them live with her and Uncle Bill.  I think Bud was probably a toddler and Lew was not yet born.  He was born about the same time that Great Grandpa died.

Great Grandma lived well into her 90's and was an invalid devotedly cared for by the blessed Aunt Jenny.
She was still alive when I was born and when I was a toddler I remember my Mamma taking me by the hand and walking me up the street to visit her in the back bedroom of Aunt Jenny's house........she was bedridden, but still knew who I was and used to shoo me to the windowsill where there was a box of sugar cubes for me to help myself to a sweet treat.  I remember thinking that she must have been a gazillion years old........tiny, frail wrinkled and wizened but with a sweet smile still. 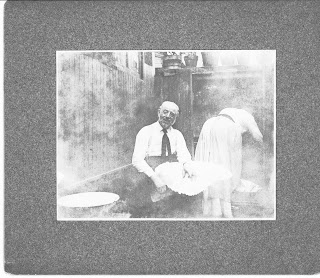 I do not know what business my Great Grandpa was in......I think it may have been Retail in some way.  I have been told that they were quite well off until the Depression hit in 1929 and then they were much poorer.  Uncle Harry was at this point in New Bedford Mass. with a department store called Bloomingdale's.  (He changed his name to Bloomingdale when he moved to New England probably because Jews were not particularly welcome there........and, when he married he chose a lovely Goy.....a wonderful lady named Essie who was a fine addition to our family regardless of religion.)
Uncle Barney was a Cutter in the Fur and Menswear  business....I think he may have even been a pattern maker.  I have no idea what Uncle William did for a living nor Uncle Jake who had moved to New York and was rarely seen.
All of the above is for benefit of my cousins and is probably boring the hell out of anyone who is not interested in the family history.  However, to jazz things up a bit I will mention that the black sheep of the family came from Uncle Jake and His wife (also a Sarah, I believe).....besides their daughters Ruth and Sylvia they had a son named Marcus who apparently had what they called light or sticky fingers.  I used to hear whispered stories of rings and various pieces of jewelry disappearing after Marcus had visited and, apparently after he honed his skills with practice on the family he took his nimble fingers elsewhere to work on richer strangers and ended up in jail for theft...(the family, of course, would never report him to the police).....I do not know if it was of the petty variety or Grand Larceny but he provided a bit of titillation for sure.  Every family needs a jailbird, I figure and I am grateful to Marcus for the whispered stories I used to overhear while I was hiding under the kitchen table to eavesdrop when my aunts visited us.  The rest of the family were Heart-warming Chicken Soup........Marcus was the spicy Sweet and Sour Cabbage Rolls.
Posted by Lo at 5:03 PM No comments: