Gotta continue reciting the high points of my 84th BD not out of arrogance, but out of awe, wonder and great humility.

For many years I have honestly felt like I have a Guardian Angel......I have had so many little "miracles" and some not so small.  When I look back at how my life has evolved and developed (sometimes actually in spite of me) I cannot help but think that I have had some mysterious help along the way.  And, what the hell.....it does no harm for me to think that (unless I take to stepping off cliffs and expecting my GA to catch me before I hit the ground) and so I go blissfully on my lonely way feeling that I am not quite alone.

I also must go on record  saying that I do not really believe in coincidences....I do, however,  believe in serendipity.......sometimes amazing and wonderful things just happen and you can't figure out how or why....you must just accept, enjoy and be grateful.......

So, there I was yesterday, waiting for my old friend, Nina, to arrive and take me out for yet another Birthday Lunch.   I was dressed (bra, jeans, shirt and even shoes.......teeth brushed, hair combed, perfume (Bellodgia, one of my favorites) dabbed here and there.....and as I sat at the computer reading a last blog or two I had a sudden thought.  Why not take my camera....for what reason I do not know.....( I rarely take my camera with me unless I have a real reason)..........but the voice in my head was so strong and insistent that I dug it out of the pile of stuff next to me on the dining room table and shoved it in my purse.

Nina arrived and off we went to one of my favorite restaurants in Studio City and, since it was a holiday (No, no....not my birthday....Memorial Day) the dining room was nearly empty and we felt like we owned the place.  As we nibbled and gabbled away Nina suddenly said, " Who is that huge, black man standing out there on the terrace?".  Of course, my vision leaves a lot to be desired anymore so I peered out and all I could see was a large dark shape so I told her I did not know and we went back to our chatting and chomfing.

When we were finished I looked wistfully at the several pieces of wonderful garlic herb bread that we had been unable to consume and thought how grand they would be as a mid evening snack and, before I knew what I was doing, I wrapped them in the napkin they were nestling in and shoved them in my purse while explaining to Nina how very much I hated waste.  (Having known me for at least 50 years and never seen me able to leave a morsel behind on a restaurant table, she already knew how much I hated waste.)   As we shlepped ourselves up to leave, she asked the waiter, "Do you know who that huge black man on the terrace is?" and he replied, "It's Magic Johnson!"   (In my head I heard  !!!**////^##@ !!!)  I do believe I screamed, gabbled incoherently, hugged the waiter and Nina and dragged her to the door with terrible panting noises emerging from my mouth.

As we exited, my feet automatically pointed themselves toward this tall, oh my, very tall dark shape seated at a table nearby and found myself standing next to his table peering avidly into his eyes.  A strange voice choked out, "Excuse me, but are you Magic Johnson?"  The dark face suddenly blazed forth with that incomparable smile that even I could see and said, "Yes, Ma'am, I am."   I lost it totally at this point and remember shrieking something restrained like, "OhmyGod....you are my Idol, you are my Hero, I love you madly....I think I have seen every game you ever played and I worship you not only for your skill on the court but for all you have done for your community and mankind....Holy Moly, this is my 84th birthday and you have just given me the greatest gift.oh, thank you, thank you...blah, blah and blah........"  I think I stopped for breath because he stood  up laughing and managed to thank me, wished me a happy birthday and said, "Do you have a camera with you?.....we can take a picture."  I was just about to wring my hands and say, "No" when I realized that, for some inexplicable reason, I DID have a camera with me, and while I was digging madly in my purse for it, praying all the while that I did not come forth and put a piece of garlic bread into his outstretched hand by mistake, I found it and before you could say "Slam Dunk" we were captured digitally by his sister and could be seen staggering away with me still in a fog still gabbling unintelligibly, but not quite as loudly.

To be honest, I am still not quite recovered from the shock of it all.  Actually every word I uttered was the truth.......I had followed basketball since I worked at UCLA in 1963 -66 and got to see a rising star there named Lou Alcindor who then morphed into a Laker Legend named Kareem Abdul Jabaar.   When Magic joined the Lakers in the 80's  I was a constant fan and I really adored the way Magic moved, played, scored, smiled, enjoyed and Won.  It hasn't been the same for me since those fabulous days of "Showtime" and I could never express how much joy he and the other teammates brought me for so many years.  Well, obviously, I still can't properly express it, but danged if I didn't try my damndest.

And, now, for those of you who may not believe in miracles......you may want to rethink that.... 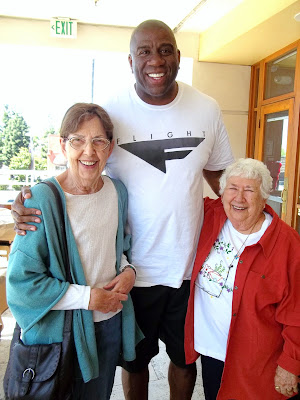