Everything But Fingerprints and DNA

Well, my dears, the BD celebration continues.......another old friend took me out today for a birthday lunch and that is another blog altogether.  I am still in a whirl over yesterday's delights.
Meanwhile, here is a bit of frou-frou from yesterday. 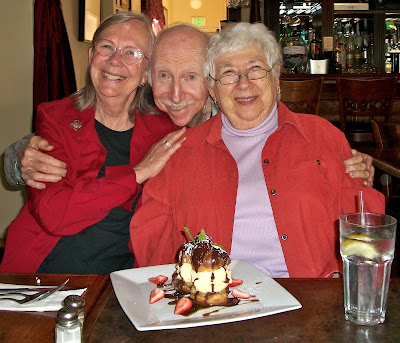 Here is yours truly ( the one with the triple double chins) with beloved friends Don and Valerie.  I have known Don for nearly 60 years and Val for quite a many.  Since Val's BD and mine are just a day apart we have taken to celebrating them together for the past few years and it is always a joy.  I don't think Don will mind if I tell you that he is quite a talented and acclaimed actor, wonderful face, gorgeous singing and speaking voice,  (having appeared on Broadway in the original production of  Kurt Weill's "Threepenny Opera", in a number of movies, Tv films and shows and many, many commercials.  He confessed humbly that he had won the equivalent of an Oscar for his starring role in a Texaco commercial years back.  His wife, Val, is also very talented, a wonderful writer, and quite an actress...she informed me she has about a hundred videos on You Tube by now among other appearances.  Anyway, When I bragged about being 84, Don topped me by telling me he was 88, and we all agreed to have some kind of blast on his 90th.

Above, you are looking at three sated souls, having just devoured  platefuls of mussels in garlic, herbs and butter, fresh baked sourdough bread for dunking in broth and split a huge Mediterranean salad, and who were gluttonously preparing to attack the most outrageous dessert...(to be seen on the table in front of me) ...the menu called it profiteroles  (sp?), but all I know is it was a sort of cream puff stuffed with ice cream, bananas, strawberries, doused with caramel and chocolate sauces....I think there were a few nuts tossed in there for good measure.  By the way....we shared it, but as you can see it was quite a generous offering.

One of the highlights of the day aside from the food and the company was the waitress who served us. She bustled up to the table clutching 3 huge bowls containing mussels and broth and gave us each our dish along with a knife and fork.  When I gently summoned her back to the table motioning at the implements she rushed off and returned with 3 mussel forks.  One of us suggested that we really needed spoons, so off she went returning with 3 teaspoons.......!   I think we had to call her supervisor and make it perfectly clear that, dolts that we were, we required soup spoons.  Poor thing....she had probably never realized that the broth from the mussels hidden below all those shells was really the best part.

All in all, a lovely afternoon with updates, giggles, reminiscences and a warm aura of  memories and much love.  Thanks, dear old buddies.
Posted by Lo at 9:05 PM 11 comments: