Someone Said There Are No Coincidences

This is meant to be just a quickie....I wanted to pass on this idea while it was still hot in my brain and before I lapsed into that dreadful...."hmmm, what did I come in here for" condition that seems to come upon me from time to time these days.
There are some life lessons that are so powerful they seem to bubble up in minds scattered all over the place.  I have always felt that there are a certain number of important truths we are meant to learn in our lifetime.......we learn them not always in the same order and some of us don't learn many of them at all.   In fact, I believe there are too many to be learned in one lifetime.   My hope has been that we get other chances to learn the ones we missed this time around, but I guess  all we can do is the best we can.

Anyway, one of life's secrets came to me in a blinding flash during one of my most miserable times...... that that there are two words or concepts that can make the difference between a life of relative joy and one of pain and misery........very simply the ideas of ACCEPT and LET GO ALREADY.  Sounds easy.....NOT.....but, oh my, the difference it makes when you finally get it.  In fact, even knowing that it is the secret to happiness doesn't mean you can always keep a firm grip on it.....it has the habit of being elusive sometimes until you can unclench your teeth and your fingers and allow some long clutched but faulty idea to drop from your clawed fingers.  Then the relief can set in again.

Affirming the same idea, I found a wonderful quote on another blog today.......the writer is a gal named Lyn and her blog is called "Minny Blue".  Here is the quote:

"Forgiveness is giving up all hope of a better past".

Which brings back the memory of my Eureka moment above and that of a friend who had hers around the same time.    She was also a gal named Lynn (actually Marlyn), a childhood friend,  lost for years and then re-encountered when we were in our 30's.  The whole story about that will make a blog of its own, but that is for another time.  We were sitting in my studio and comparing notes on the parts of our lives that had transpired while we were out of touch and she looked me piercingly in the eye and said,

" Don't laugh but my biggest insight during the time I was in Therapy was when I finally realized and accepted that I would never have a Happy Childhood." 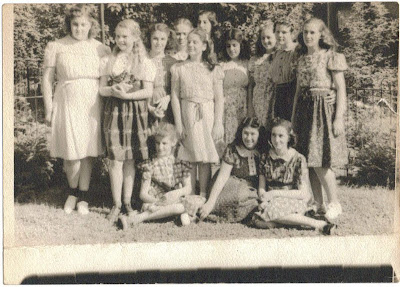 The photo was taken on
my 13th Birthday in the back yard
of our home in Philly.  This was my
childhood gang of BFF's but the only
relevant ones are the girl 3rd from the right, back row....that is Marlyn whom I quote above.  For the record, I am  the pudge seated in the center of the front row.
Posted by Lo at 5:36 PM 8 comments: