I just had my first absolutely delicious swim of the 2011 season.   Laughingly, I used to call this my $500 swim explaining that I applied all of the costs of having and maintaining a pool to the first swim and then all the rest were FREE.   Uhhuh.  That was back when pool service was $25 per month and water and power was much cheaper and all the equipment lasted for a few years at least..

Considering that I have recently spent thousands to replace my filter and pool motor, more hundreds in expanding my Electrical system  to better power the pool motor, more thousands  installing a salt to chlorine system to replace plain old chlorine (system broke down this year and needs replacing again),   and I don't know how many thousands installing solar heating to warm the pool  water, God only knows how many bucks  to apply to this swim....it ain't cheap I'll tell you........I could probably buy a small Third World Country for less...... but it is still worth it.  (what would I do with a small Third World Country anyway?)

The fact is that exactly 39 years ago I was looking for a house to buy and there was this one on Califa St..  I really remember very little about the house itself as I walked through except that it had some rooms  and did have indoor plumbing.   Then I stepped out the back door and saw this huge, gorgeous aquamarine pool gleaming and rippling in the sunshine and without further ado, I bought a swimming pool which happened to have a house along with it.  And I have never for a minute regretted it.  (well, maybe for a minute or two when  the filter and the motor and the salt-chlorine system all went out this year). 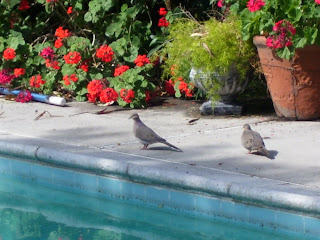 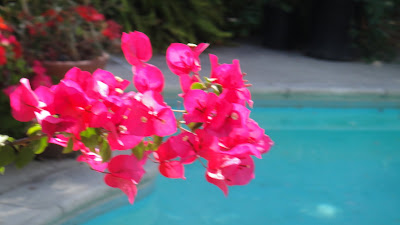 Fortunately, although I have neighbors on each side and aft, I have cleverly managed to plant shrubs and trees and vines, and allow them to become so overgrown and rampant that I have a private little enclosed park/forest of my own which provides 99% privacy so I can skinny dip at will ........which is the only way I like to swim any more.   Oh my.....the feel of the water on totally bare skin is indescribably wondrous and can cure a basketful of ailments, I'll tell you. (If you are wondering about that wayward 1% of non-privacy, I say fuck 'em.....anyone who wants to climb up and peer through a tree to see a zoftig old lady potching around in the pool is welcome to do so).  Right now my solar heating system has the water up to about 85 the dial says...I think it is closer to 80) and when you stand in the shallows where one input vent is located  and let that warm water jet  massage your back, it can't get much better than that, except maybe when you grab the foam kick board, do a few lengths and then just float around as the current takes you in lazy circles with your head resting on your arms on the board and the warm water gently lapping at your dimpled, cellulite thighs.

Before you all end up hating me  I will rush to explain and that, prior to this indulgence today, I did a bunch of potting up, weeding and pruning and clearing of dead stuff in the flower beds, repaired parts of the drip system which I put in a few years ago to water the pots of flowers around the pool,  and hand watered all of the pots just for good measure because it has  been mighty hot here this week and I will have to reprogram the drip system to run for a longer amount of time as summer approaches.  I  was a hot, sweaty, sticky  mess when I realized that I could, after all, take a swim today.......It used to be that I would start in April by poking one foot into the water to test it and if I managed to get away with only one scream I pronounced it fit for swimming.    That meant the temp was about 72.  No, no, no....now it has to be around 80 and no screams if possible.

And so,  in California at least, it has morphed into swimming season and I feel so damned lucky not only to have  a pool, but to still be physically  able to get into it and swim a bit, and, even more important, to still be able to climb up out of it when the dip is over  (getting in is relatively easy because the water supports your weight.....getting out is something else entirely )    ........funny.......39 years ago I would never have even  been able to imagine that being a problem.......next year I will probably have to invent a pulley and hoist system, but this year I will make hay, as they say, while the sun shines.
Posted by Lo at 6:31 PM 13 comments: