I realize that I am digressing from my stroll down thru the generations, and I promise my family that I will get back to that history as soon as I get Panama out of my system.  Having once stirred up these memories I feel that I had better continue to the end.  I am living right now in a strange condition.....part ecstacy and part misery and I don't want to have to return to this riccochetting  back and forth between pleasure and pain. Of course the pleasure part is because I can almost reexperience those halcyon days when I think and write about them....the pain comes from my character flaw of always wanting MORE. There are not that many periods in my life that I would chose to relive, (not because they were awful but because I don't think you should try to change your life in retrospect.......what's done is done and you "done" just fine under the circumstances) but I think I would love another go round at the Panama Affair.
However, this is as close as I am going to get to nibbling at that marvelous feast again so..."Thank You, Blog for this chance". 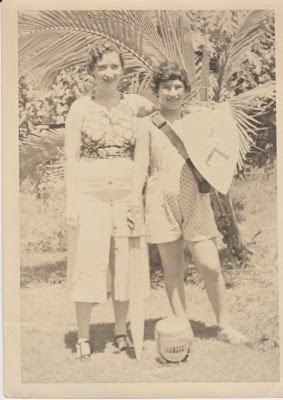 I haven't forgotten that I promised you the tale of how I learned to swim, but in looking for pics from Panama I found several that are integral to my bliss there and the photo on the right deals with one  of my joys.  There was a wonderful Library in the Zone and having always been a voracious reader I immediately got a Library Card and it was there that I made one of my most wonderful discoveries.....the Legend of King Arthur and the knights of the Round Table.  I was totally smitten by the entire myth and gobbled up every word I could find on the subject and then daydreamed myself into the plot.  Some friend of my parents took pity on me and helped me create a cardboard helmet and shield and he even went to a wood shop and had a wooden sword crafted for me.  Please do not ask why I did not identify with Queen Guinivere instead....I had no time for such nonsense....I was a tomboy of the worst or best kind and if I couldn't be a knight of King Arthur then I would just be a cowboy riding with Tom Mix but I wanted nothing to do with satins and laces and such tomfoolery.  Anyway, I spent weeks galloping around Amador Road fighting dragons and evildoers before the attraction palled and I hung up my shield and helmet.
It was in Panama that I also learned to fish.  There was wonderful fishing everywhere off the coast and one day my parents and a group of friends who were avid fishermen decided we would all go out one evening and have a fishing party.....the experts would teach us landlubbers (who had never cast a line and and who flinched at the sight of a worm) and we would all have a jolly time.  Next thing I knew about 6 of us were all in a good sized rowboat rowing across some bay to a dock way over there somewhere and upon arriving the men in the bow proceeded to tie us firmly up with a huge rope.  I was handed a coil of fishing line with a hook on the end and some unfortunate creature impaled thereon and told to toss the hook over the side and keep the coil around my hand.  Of course, I obeyed.  To be honest, I never expected to catch a fish....in fact I almost hoped I wouldn't catch a fish because I was quite shy in those days and really didn't want any attention.  I would have been content to just sit there clutching my coil of rope and watch the others haul fish in all nite long.  The Gods heard my prayer and laughed themselves silly. They had other plans for me.   Before I knew what was happening I felt a tug on my line and then a strong jerk and pull and someone yelled, "You have a bite, Lo, pull it in." so I dutifully pulled and, lo, a good size fish promptly flopped into the boat.  I was congratulated and given a new bit of bait on my hook and back we went to waiting for a strike.  Hardly 5 minutes passed before I felt another tug on my line and then some more commotion under the boat and someone yelled, "You have a bite, Lo, pull it in" and so I did and another fish plopped in and flopped around our feet.   I swear to you that what I am tellling is the God's honest truth.  We sat there for several hours and no one else got even a nibble, but I could hardly drop my hook into the water without some damned fish grabbing it and trying to pull me in.  I was in agony because I knew that the other men were getting really irritated with me hoggging all the fish in the Pacific (I didn't blame them....it was boring for them AND annoying....I would have gladly shared all the fish in the Pacific with everyone) and what was worse, my Father, who was a notoriously bad sport was really getting pissed at being so outshone and if there was anything I didn't want to do it was to irritate my incendiary Father so I sat and prayed that the fish would go to any other hook but mine and even considered dropping my line into the water when no one was looking so I would be spared having to pull in yet another fish. and avoid having even my Mother hate me. 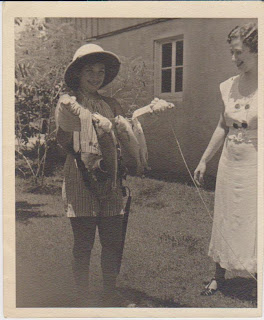 Suddenly when I was considering jumping overboard and trying to drown myself we all noticed the weirdest thing.....we were all sliding off of our little wooden seats.  Thank heaven, attention was diverted from me but what was happening?  A brief examination showed that the line which we had tied up to the dock several hours earlier was now stretched tight and somehow, the water level seemed to have dropped about 3 feet so the bow of the boat was pulled high out of the water leaving only the stern half afloat.  Everyone had forgotten that the tides in Panama were extreme to say the least and, obviously, the tide was going out!  There were many moments of panic, ill concealed, while all the men clambered up to the bow and tried to climb up the rope to the dock to unattach us.  Somehow, someone succeeded and in a little while we were once more level and floating.  However, everyone had lost their taste for night fishing so back we started to the point of departure. I was all for pulling my line out of the water but was told to leave it and just troll, so, of course, I obeyed trying  frantically to put a curse on my hook so no self respecting fish would come within a yard of it, but when the fishing Gods single you out for a bunch of laughs at your expense you might as well just impale yourself on their tridents as fight fate.  Suddenly I had not a tug on my line but a jerk so monumental  that it nearly catapulted me out of the boat. I screamed and tried to hang on while the coil of rope around my hand tightened and threatened to remove those fingers permanently.  The pull was so strong it actually pulled the boat around despite the rowers and everyone was shouting and screaming either advice or curses.  Whatever was on my line had to have been  at least a whale and I can only thank the fishing Gods for taking pity on me and finally enabling it to break my line and escape.  We made it back to the shore in silence and I don't remember whether much was said on the way home.  I do know that was the last time they invited me to go fishing and, holy mackerel (if you will excuse the expression) was I glad ! 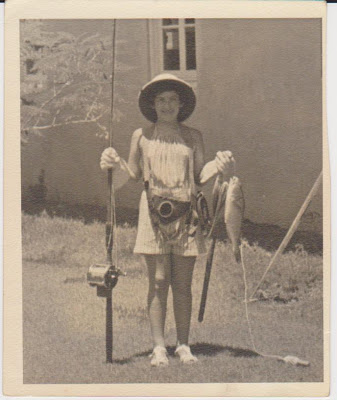