My Excuse for Blogging

Now you must understand, this whole blog thing was meant to be more than a casual and frivolous indulgence....when originally considered it was intended as a kind of legacy to describe and explain the older generations of the family to the younger ones and, in another way, my only chance at a kind half-assed of immortality.

Should any of the newly born  (my youngest cousin, Noa Belle) or even so far unborn ever ask, "Who was cousin Lois?", these fragments of musings and occasional  bits of family history  (if preserved) will, I hope, be able to provide a somewhat 3 dimensional flesh and blood picture of me, the family worshiper, booster, cheerleader, defender, historian and the Family Oddball  (if I do say so myself). It is intended also to provide some real idea of who the older generations were and what they were like as real people, not just names and funny old photos.  (I will produce some of the funny old photos in due time. and lots of narrative too, I promise.)

The very sad fact is that I am the last of my generation and sadder yet is the fact that I have no offspring so I am the end of this particular branch of the family.  (When I chose to not have any children I did not think about those ramifications....though I know I could never have managed to raise a child just for the purpose of continuing the gene pool.  And the choice was not purely selfish....I was definitely considering the well being of the potential  child as well.   I joke that never having been able to be a child I have no basis for relating to them now.....I hope that is not too off-putting to my readers......I am not an evil person....I do not HARM   children.....I just can't bring myself have anything to do with them until they are at least about 25, self supporting, with decent table manners and in full comand of language and particularly of logic.

If that be a character flaw, so be it.  I try to make up for it by being extra kind to the environment, all  animals and some adults.  You must admit that a person who can clean 6 kitty boxes daily while singing "Sunny Side of the Street" cannot be all bad.

Just Your Every Day Front Door.....NOT

In an effort to brighten up my offerings with a picture or two I have gone into my disorganized files to see what I could find and, sadly, I have not been able to find any of the smashing photos I was looking for, so I finally settled on these two which you must admit are
not your every day photos.
In fact, I defy you to come up
with another blog displaying pics
of a front door.   Oh, hell...I guess there very well may be one somewhere.  But not like mine!! 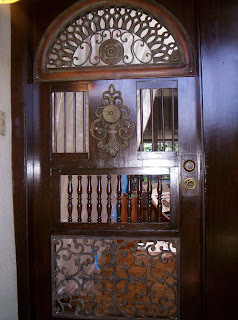 This happens to be what I consider one of my greatest design     achievements.  I have mentioned in an earlier blog my inability to conquer my character flaw of                  Packratting.This is a prime example of same along with a demonstration of what can be achieved by putting  together a bunch of disparate collectibles and salvaged items into a unique production.   By the way, I am totally at a loss to control the placement of the type in this effort........I do not know where my next word will fall and it is extremely disconcerting so forgive me if I end up with a page that is an utter horror. 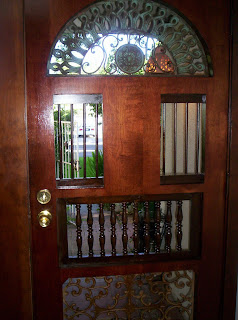