So there I stand at the kitchen sink, washing kitty dishes and getting ready to face the day with brain only one quarter stirring and engaged when I think I hear the sound of a jet engine in the little outside nook beyond my kitchen window.  Even one quarter brain registers this as highly improbable so I scrunch up my eyes to try to see better and I observe that it is NOT a plane nor is it Superman.....it IS a bird....in fact several birds.........hummingbirds, to be exact and they are whirring around and dueling like crazy with their rapier-like beaks, trying to establish which one of them actually owns the feeder that is affixed to my kitchen window.  The fact that there are 5 more feeders within a 6 foot radius doesn't matter to those voracious, contentious  little beasts.  Each one of the flock seems to want to own all of them......there is, apparently, no loving kindness among hummers........just greed. But they are so remarkable and so beautiful that I must forgive them.  I love watching them.  The picture below is not me....don't I wish....but one has to sit still for hours or days to get this to happen and I no longer have the patience.  However....ain't it grand? 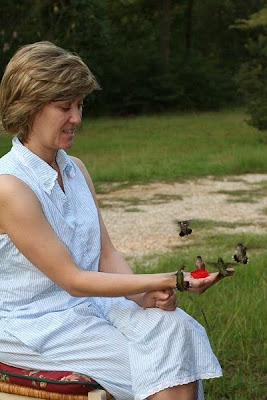 When even my fat, but still hungry cats,   batting me about  the  face and neck with their paws and leaping with concrete-clad feet on my unprotected tummy cannot get me up to feed them, my thoughts that the hummingbirds are probably flying in circles and bashing into walls desperate for their nectar usually galvanizes (?) me into action and I stagger out of bed and into the kitchen.  Right now I have 8 feeders hanging at various places around my house and when I peer out each morning most of them are quite empty even though they all had contents when I went to bed the night before.  (Of course, the fact that I am one of those loathesome creatures who watches TV or reads until 4 am  and consequently does not stir until at least noon probably has something to do with it.  I have not been able to train the hummers to keep the same schedule.) But what I have done to somewhat solve the problem has been to send away to Ebay for an extra set of feeders so that I can fill at least the 4 extras at night before I go to bed so that they will be all ready to be plunked up on their hooks the moment I am ambulatory.

It usually takes 10 or 15 minutes after I hang the full feeders before the little hysterics calm down, decide they cannot defend all the feeders at once and grudgingly settle down to feed at just one or two of them.  From that point there is generally at least one bird  outside my kitchen window guzzling away every 5 minutes or so throughout the daylight hours and even into the twilight.

I often wonder what the hell they did before I started my Hummer Smorgasbord and somehow convinced all the neighbors to do the same.  These damned birds are now obviously the Rockefellers of the bird population due to our largesse.....were they on Welfare before I showed up??   Did they perch pitously on street corners with teensy signs that said "Will Hum or Whirr for Food"?  Somewhere I read that humingbirds cannot walk though I recently saw a documentary that showed one variety that hops like hell all over the flower strewn field to find their meal.  I also learned that they cannot survive on nectar alone and must get some protein via ingesting tiny bugs.  I must admit, I have never been able to observe them doing that and it is probably just as well because I might be driven to go out with some tiny net and attempt to capture some goodies for them.  My life as a handmaiden to critters is complicated enough without that, thank you. 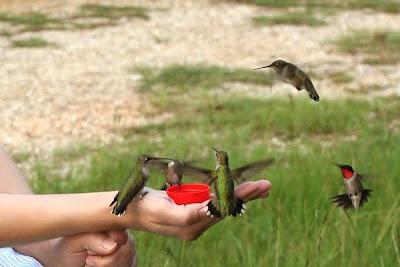 One of these days I will stumble upon the photo I shot out of my window with one of my very own tribe and when I do I will publish it.  In the meantime, these will have to do.  Now I must go back to washing and filling feeding bottles.  Hummers don't come cheap, you know.
Posted by Lo at 7:55 PM 7 comments: