She Keeps Coming Back....... Like the Tide (or Heartburn)

Well, my dears, it is long past time that I reappeared after surviving having my throat cut.....sorry for the long silence, but I found this so-called simple little operation quite taxing. Perhaps I can blame it on the fact that the surgeon (no doubt a stellar fellow at his craft) chose to execute a bit of creative stitchery on my jowls, therby making it impossible for me to turn my head to the right. I have made various jokes about this situation including giving thanks that I had not spent a fortune for tickets to Wimbledon or Forest Hills thus being able to watch only the left half of the tennis match. However, It has made me.....well.......grumpy to say the least.

I have also found myself a bit woozy or light headed and have questioned my doctors as to whether this sudden renewal of blood circulating to my brain has perhaps proven to be too much of a strain for the ancient plumbing therein. I have been roundly laughed at for this theory so I have decided to keep it to myself from now on. (It makes perfect sense to me !) However, I seem to be improving a bit day by day and decided today that I have been sufficiently self indulgent, lounging around indolently on overstuffed sofas and cosy recliners wondering what interesting stuff has been going on in the right hand side of the room that I have been missing. (not a damned thing, of course).

So here I am, back at my blog post, generating some of my usual nonsense. Actually, my plan is to attempt to conjure up some goodies from the past for your delight and contemplation.....depending on whether or not I can manage to wrench forth a few more drawings from the insatiable maw of the picture files. My wonderful cousin, Bruce, just visited me today and brought a bounty of precious stuff which his father had saved (his father, my cousin Bud, who has appeard in these pages somewhere was undoubtedly the world's most accomplished Pack Rat and his offspring are still discovering stuff in his treasure trove even after years of selective culling. What Bruce found was a whole bundle of samples from my line of greeting cards which I had sent to Bud during the late 50's and which are in amazingly pristine condition looking crisp and spritely though a little dated. Many of these I recognized but did not even remember doing......I was quite a busy bee back in those days apparently. With all the drinking and carousing I indulged in back then, I can hardly understand how I had the time or the stamina do so much actual productive work.

Anyway, without further ado I will attempt to summon them from their hiding place. 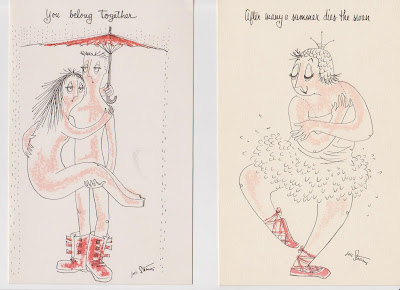 Now to try for a couple more. Only trouble is that, once again, I am having trouble putting the type where I want it so I will sinply say that the card  below, right has an inside caption that reads," For Medicinal Purposes Only".

I guess it is only fair that I attempt to display the inside drawing of
What", 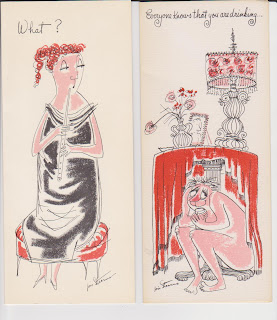