This is a deadly serious request for info and advice.  I have been intending to take advantage of the publishing service offered somewhere here and at least publish some of my family blogs to give to....who else....my family.

I saved the site when I first saw it and as I recall they offer some limited number of pages....20?.....for $14.95 and up and additional pages at .35 or some such.   Sounds great to me.    Have any of you dear bloggers ever done this?  If so, did it come out to your satisfaction?  I would be hugely grateful for any information you can offer on the subject.

This and That (Still Cheating)

Well, hell, since I have opened a window into my brain and invited you all to look inside I guess there is no use in being reticent about showing you some of the views outside my head.

I am not doing very well at all with my latest digital camera so most of these shots have flaws to put it kindly.  However, they are better than the proverbial poke in the eye with a sharp stick so I will post them with apologies.


The photo to the left is out of the my kitchen window and shows my lovely little fountain which burbles comfortingly during the warm months.  As is everything else in my little plot of land, the planting beds are all overcrowded and overgrown.....................  I never know when to stop.,,,,,,I never can resist poking a broken off shoot into the ground on the remote chance that it will grow........and often it does much to my mixed delight and horror.. 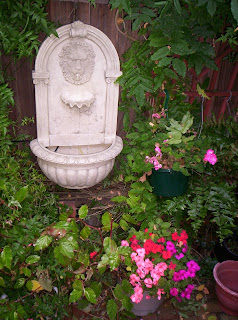 Out this window is also the site of 5 of my 8 hummingbird feeders.  As I stand there washing kitty dishes or chopping onions or veggies for my own needs I can watch the little devils as they feed and chase each other in their selfish attempts to lay claim to all the feeders to the exclusion of the rest of the flock.  Mine are the variety called Anna's Hummingbirds I think..... In sunlight their backs are a gorgeous irridescent green, their heads are magenta red and there is s bit of black and white for accent here and there.  In the shade they look nearly drab brown, but there is always a flash of the wonderful green or red as they whirr around and duel with each other.  I will never forget the time I found one lying on the ground at the base of one of my sliding glass doors.  He had flown into the glass and bonked himself silly.  He looked dead as a doornail and I was wailing and moaning as I gently picked him up to see if I could give him CPR. (?)  As it happened I noticed that his body was not limp and floppy like the dead birds that Gussie occasionally favors me with so I rushed into the house clutching him, mixed up a little batch of sugar water with a dollop of brandy and proceeded to trickle it into his beak with a toothpick.  After a few minutes of my tender ministrations his little eyes snapped open and he began to struggle to get free so I carried him back out and gently opened my hand.  He sat there for a few moments fluttering his wings and checking out the situation and then, without even a "thank you" or an  I'll send you a post card" off he whizzed up to the top telephone wire.  I watched him getting his bearings and probably wondering why the world was swinging around a bit in his head (that was good Brandy) and then off he went on his rounds.  That was many years ago but I often wonder if it his descendents who are guzzling my sugar syrup are wondering when I am going to spike their nectar with some of the good stuff.
The photo below shows one of my resident hummingbirds feeding and,  I believe, a second in the bush waiting his turn. It also shows, unfortunately, the flash in my kitchen window and probably reflections of some portions of Lois that were better not seen.  Oh, no....that's OK it is only my hands.  (I know I should have killed the flash but then the birds might not have been as clear.) 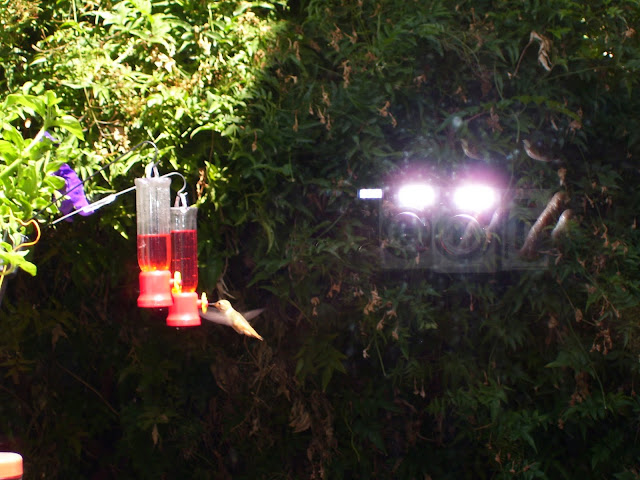 To the right is a rather amazing picture.  I live in a very urban area even though it is given the bucolic name -San Fernando Valley.  I have lived in this same  house for  38 years and only once or twice did I ever see the type of bird called a raptor.  Most of my clientele are songbirds, sparrows, doves and hummers with the great crows showing up fairly frequently.  My favorites are the mockingbirds....I am crazy about that nutty dance they do on the top of the telegraph pole......leaping in the air about 3 feet, with much fluttering of wings and then drifting down to settle back on their take off spot.  I don't know if it is a mating thing or what but it always makes me giggle.  And I love their song.   But I digress. 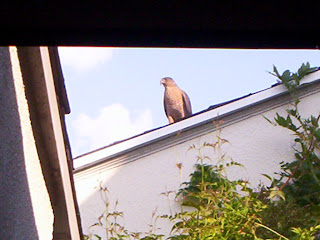 The bird to the right is sitting on my next door neighbor's roof right outside of my kitchen window and I swear it is some kind of hawk.  Probably Troutbirder can tell me exactly what kind, but this guy showed up swooping over the rooftops one day in summer, looked over the terrain to see what might be on the menu for him and apparently turned up his nose at the neighborhood squirrels and kitties.....thank heaven.  Then off he flew never to be seen again, but I was really awed and impressed that he had honored me with his presence.  By George, you never know WHAT you are going to see out of that kitchen window......it is a veritable Nature's Peep Show.

OK, Blabby, enough, already.  I must confess I am a total failure at doing cheating type Blogs.   I am so addicted to this damned blogging that I am beginning to get a bit uneasy.  Several times when I have wakened at 4am and don't fall right back to sleep I have caught myself sneaking around in a suspicious manner, tippy toeing (so as not to give my intentions away) into the den  where the computer has been oddly  left ON and adding a few sentences or a photo to one of my drafts for the next day.  (Of course, I am not totally insane.....I do go back to sleep after a half hour or so of this nonsense....still.......the ominous signs are there.  Dammit, no sooner does a person get rid of one Obsessive-Compulsive behavior than another one leaps up to take its place.  Sigh.  I have heard that Nature abhors a vacuum.....I used to wonder what she had against cleaning machines......(sorry....couldn't resist).

I will sign off with my usual threat.....More later.

Writing about my husband, Pete, the other day and the trials and tribulations of those who wrestle with Demon Rum  brought back a wonderful old Dixieland Jazz song that I can't get out of my head. I wish I could publish the music so you could sing along, but I do not have it so I will simply quote the lyrics and try to give you an idea of the rhythm.   Please remember that this is old fashioned stuff where the lyrics tell a simple story and the melody has.....well melody....many of you young whippersnappers may find it difficult to relate.

I was floating down
that old Green River
On the good ship Rock and Rye.

But I drifted too far,
I got stuck on a bar

I was left all alone
Wishing that I was home......

The ship went down with
the Captain and Crew
So there was only
one thing to do.

I had to drink
that whole Green River dry
to get back
home to yoooooou.

I remember vividly the first time I heard Dixieland (or, as I prefer to call it, Classic Jazz.  I was about 10 years old.  My Mother, Dad and I were sitting around the kitchen table with watercolor paints and brushes, adding color to a stack of Christmas cards my Dad had just printed after carving the image into a linoleum block.  (This was one of the few times that Pappy roped me into one of his projects that I was tickled pink to cooperate.)  As was usual in those days, the radio was on and it began to broadcast a show that was entitled "The Chamber Music Society of Lower Basin Street."  The host was Milton Cross, a very respected announcer and commentator of the weekly broadcasts from the Metropolitan Opera House.  The program started out very seriously as a spoof of a classical music concert and then the music began and it was glorious jazz with a fantastic little band of consummate musicians and a vocalist who was just getting started named Dinah Shore.


At the first driving phrase my heart pounded, I couldn't breathe and then I couldn't keep my feet from tapping......I was in love.  It was a love affair I never got over.  Almost 40 years later, after I had met Pete, I had the incredible joy of meeting one of the same musicians who had been a regular on that show. His name was Henry "Hot Lips" Levine, by then in his 70's or maybe 80's,  and he was playing with his great little 5 or 6 piece band in a lounge in one of the big hotels in Las Vegas.  Of course he knew Pete and was tickled to see him after many years  so I got a hug and a kiss from this idol of my childhood and had the chance to sit and eavesdrop while they schmoozed about the good old days.  What a double hoot.
I must be honest and confess that, even though I am faily well adjusted to this technological age, every now and then I wish for the days when you could turn on your radio and listen to the The Shadow, The Green Hornet, Fibber McGee and Molly and......Basin Street Chamber Music. 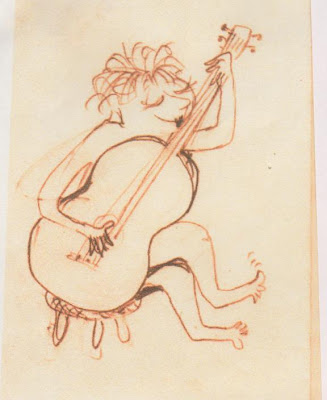 The drawing above is barely related to anything else on this page, but what  the hell.........it is sort of related to music.  It comes from my previous life as an Artist and while I often still do these scribbles for my own amusement or to celebrate some occasion in a friend's life I do not do it often enough. Perhaps the Blog will get me back to my roots and I can begin leading a double life for your entertainment.
Posted by Lo at 12:01 AM 12 comments: